Freedom: Why all Our Bosses are Idiots 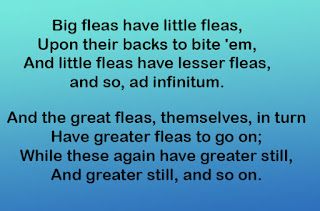 Did you ever wonder why your boss is an idiot? I mean, really.  It's a universal concept.  Do only idiots become bosses? Are bosses more likely to become idiots because of the pressures make them stupid? What's going on?

Actually, it's very, very complicated - but relatively easy to explain. Let's begin before the first boss, with the first sign of life.

Dead things, after all, don't have bosses.


A single cell. It is, in theory, totally independent. But theory doesn't last for long in practice. Cells grow.  When they grow, eventually, they grow too big for their skin, and they explode.  If the explosion is a failure, they die. But if it is a success - two cells emerge.

Each cell is no longer just an individual - it is part of a community. Cells in a community can compete, or cooperate. Actually, they do both. Every cell is still an individual, so it competes. But every cell also benefits from cooperation. A single cell could not cooperate with anyone.  Two cells can cooperate.  Cooperation is a new force, that did not exist for a single cell. The force of a boss has emerged.

What does this boss look like? Cooperation is an invisible boss. It does not need to tell anyone the rules - the rules lead to success. Going against the rules can lead to failure, or non-optimal success. Cells that cooperate do better, even when boss is invisible, they still follow the rules.

The cells are not aware of the boss, of the community.  Each cell is only making its own decisions, looking out for number one. If the cells were asked, they might reply "The boss (community) is an idiot.. It doesn't have any idea what's best for us cells. It's just looking out for itself." And it's true. But that's not all that's true. As the community becomes stronger, it forms a tissue - a higher level entity consisting of cells, in many cases, different types of cells working in cooperation.

Communities of tissues are separate living entities like lichen, fungi, plants, etc. These living entities are their own boss. Their bodies are boss of their tissues, boss of their cells.  The lower level tissue and cell entities have no idea. They are not conscious. Each is looking out for number one. The lichen, fungi, plant, makes its life decisions without any regard for it's cells, or it's tissues. Except that to succeed, they must succeed in some fashion.

Communities of tissues can develop limbs and bodily organs. And then another layer emerges. Limbs cooperate, in animals - even in simple insects, to facilitate locomotion. Bodily organs cooperate to create a healthier, more flexible body. With more capabilities, more opportunities.

As the hierarchy rises, each new layer creates a new set of abilities and objectives, that are not available to entities lower down in the hierarchy. It also creates new vision. 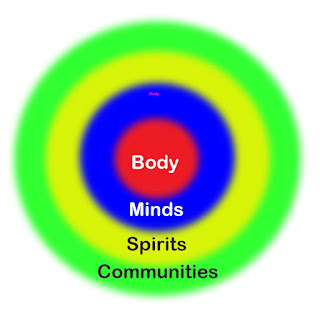 As humans, as individuals, we each have many of our own bosses. Are we controlled by our bodies?By our minds? By our spirits? By our desires? By our communities?  When we look closely, we see the need for different individual bosses at different times.  Our short term boss wants to get fed, to get sleep, to enjoy life. These bosses are often not logical - they are driven by feelings and emotions. Our medium term boss wants to get ahead, to keep fit, to gain control of our lives - this boss is our mind, but it is not always in charge. Sometimes our desires and feelings override our mind.  Sometimes our mind overrides our feelings. Sometimes, our strength of spirit can put aside our feelings, and allow the mind to rule. Sometimes, a stone in our shoe takes control from the mind, the spirit, and the body - until we deal with it, and then we can pay attention to a different personal boss. Sometimes our family, or other community - the church, the government, the corporation, works as a boss, to change our plans or actions, to move us in a different direction.

There is another complicating factor.  The boss is also a human, with personal objectives. In some cases, for example, the boss's goal might be to get a promotion, to escape from those workers, or to retire wealthy at any cost.

In any case, the boss is often seen as an idiot - from the worker's perspective.

When they are not aligned, it's easy to see that the boss's boss is an idiot too. Even when they are aligned, as much as possible, it's easy for some workers to see each layered boss as an idiot, not understanding the personal needs and objectives of the worker. And so it goes.

The higher the hierarchy, the higher the layers of idiot bosses. I once worked for a company that had 5 layers of bosses, and then a board of directors, and finally the owners. Each had their own objectives, which changed over time - even more so as individuals came and left. I was a first level boss.  My boss, was an idiot - a real idiot.  But when I went up the hierarchy to complain, I was made aware of the reality. My boss was the son of an owner. He got his job as a family 'perk'.  He was not expected to do his job well - it was my job to help pick up the slack. I resigned, but then I had to find a new job, a new boss... for better or for worse.

There is no doubt of one thing.  Every boss is an idiot - to the people below.  Many are idiots to their co-workers, and some even idiots to their superior bosses, who are deliberately planning to eliminate them.

On the other hand, we need to recognize that we all need bosses.  Our bosses and their communities give us more opportunities, more power than any single individual. They are what makes us stronger than plants and animals. We need our idiot bosses. They make us stronger and healthier - except when they don't.

That's how it is with health, and with freedom. It's never simple. Health benefits from multiple layers of hierarchy. Every new layer creates new opportunities for cooperation and for competition. There are lots of questions, and no easy answers, except this: all bosses are idiots.

To your health, tracy