Why We Can't Cure Scurvy

I know what you're thinking. Your thinking "That's crazy, we know the cause therefore, we know the cure". But you're wrong.  Simply wrong.  And the proof is trivial. Simpler than you think, and sillier than you might guess.

Let's check MERCK's famous Manual of Diagnosis and Therapy. Their latest the 19th edition was published in 2011 and it says "In developed countries, vitamin C deficiency can occur as part of general undernutrition, but severe deficiency (causing scurvy) is uncommon." Scurvy is caused by a dietary deficiency of Vitamin C in the diet.

MERCK recommends: "Treatment: Nutritious diet with supplemental ascorbic acid.  For scury in adults, ascorbic acid 100 to 500 mg po tid is given for 1 to 2 wk, until signs disappear, and followed by a diet supplementing 1 to 2 times the daily recommended intake. In scurvy, therapeutic doses of ascorbic acid restore the functions of Vitamin C within a few days. The symptoms and signs usually disappear over 1 to 2 weeks. Chronic gingivitis with subcutaneous hemorrhage persists longer."

Well, that's just silly.  Or is it?  Maybe we should check another reference.  Surely we know how to cure scurvy?

How about Harrison's Principles of Internal Medicine, another reference text, with thousands of pages. Here's what the 18th edition has to say: "Vitamin C deficiency causes scurvy." That's pretty clear. But does it say how to cure scurvy? "Administration of vitamin c (200 mg/d) improves the symptoms of scurvy within a matter of several days."

Harrison's does not use the word 'cure' either. We can, apparently, treat scurvy, but we cannot 'cure' it. Is it possible that both of these books made the same simple error?  Maybe one copied the other?

How about Lange's Current Medical Diagnosis and Treatment? Under the entry for Vitamin C, it says "Early manifestations of vitamin C deficiency are nonspecific and include malaise and weakness. In more advanced stages, the typical features of scurvy develop."  All three agree, a severe dietary deficiency of vitamin C causes scurvy, or at least the symptoms of scurvy. But does Lange's reference tell us how to cure scurvy? "Adult scurvy can be treated orally with 300-1000 mg of ascorbic acid per day. Improvement typically occurs within days." Again, we are told how to 'treat' scurvy'.  But Langes does not use the word cure.

I could go on... I often do.  But let's pause for a moment and to compare the three recommended 'treatments' (not cures). 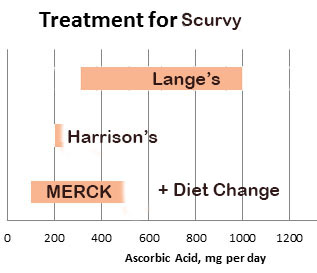 MERCK recommends a follow up dietary change, a supplement of 1 to 2 times the recommended daily intake of vitamin C. Harrison's and Lange's also make no mention of dietary changes.

The three medical texts give three different treatments for scurvy.  Which is correct? Do any of the treatments cure?

Is scurvy an incurable disease?

No, it is not.  But if you check any illness caused by a nutritional deficiency, in any of these three, and many other medical reference books, you will not find the word 'cure'.  Why not? Perhaps it's because only medicines can 'cure' a disease.  After all, it's official, it's the law. According to the USFDA regulations, "Nutrient deficiency disease claims describe a benefit related to a nutrient deficiency disease (like vitamin C and scurvy) ... If a dietary supplement label includes such a claim, it must state in a "disclaimer" that FDA has not evaluated the claim. The disclaimer must also state that the dietary supplement product is not intended to "diagnose, treat, cure or prevent any disease," because only a drug can legally make such a claim."

Cure, it seems, is defined by drugs. Only drugs can cure.

But, of course there are lots of diseases that can be cured, but not by medicines. How do the US FDA and the medical texts get around this problem? Simple avoidance, they don't use the word 'cure'.  If you don't use the word cure - except for drugs, except for medicines, then it's easy to say that 'only drugs can cure'. QED.

I've used scurvy as a 'model illness', to illustrate the fact that there are many diseases, that we know how to cure, that 'officially' cannot be cured. There are many more.  Think heart disease, hypertension, diabetes, arthritis, depression, obesity, and more.  Any disease that is not caused by a parasite - cannot be cured by a drug, and is thus 'incurable' according to current medical theory.

Curing Disease
But, we really can cure scurvy, right? Actually, it's not so simple. Let's suppose someone has scurvy. And we use the treatments recommend by MERCK, or Harrison's, or Lange's.  Was it cured?  How can we tell? We can't prove that any patient's scurvy has been cured.

There is no test for 'scurvy cured'.  We can't prove it was cured, because there is no medical test. We can demonstrate that the patient no longer exhibits symptoms of scurvy.  We can prove that the patient can no longer be diagnosed as having scurvy. But that doesn't prove the scurvy was cured. There is no definition of 'cured' for scurvy, nor for any other disease not caused by a parasite.  We can't prove that someones obesity was cured, or that their depression is cured, nor their hypertension - high blood pressure.  Cure is not defined, therefore it cannot be proven. Therefore it cannot be accomplished.

A symptomicine is a treatment that addresses symptoms, but not cause. Symptomicines lead directly to chronic illness.  In this case, to chronic scurvy. The treatments recommended by Lange's and Harrison's cannot cure. They can only lead to chronic illness, to chronic dependency on the 'medicine'. The treatment removes the symptoms for a while.  The patient returns to their normal, unhealthy eating pattern, and the symptoms re-appear.  The scurvy was treated, but not cured. It returns as soon as the medicine is stopped.

Cures:
An illness is cured when the cause is addressed.

Only MERCK's recommendation: "followed by a diet supplementing 1 to 2 times the daily recommended intake." can cure. If the diet is changed, the disease can be cured, forever. Merck's treatment is the only one that addresses the cause.

We might ask, in this day and age, why two of three medical references do not recommend the 'cure', why they give incomplete recommendations, recommendations that cannot cure. Frankly, I cannot think of an answer to that question.

MERCK's recommendation can cure scurvy.  But there is no test for 'scurvy cured'. So MERCK, like the other two text, even though the treatment cures, does not claim a 'cure'.

Can we cure scurvy? If we want to cure scurvy, (or any disease not caused by a parasite), we need a definition of cured. How can we tell if the illness is cured.  Are there any models, any incurable diseases, where we cannot prove the disease was cured - but we use the word cured? Yes.  As far as I know, only one.

It's a bit of a silly rule.  Arbitrary.  But useful. With this rule, we can cure any illness, and we can tell if it is cured.  We just need to adjust some details, and timelines depending on the disease.