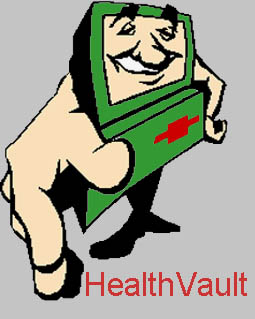 Wouldn't it be nice if you could keep all of your medical records in one place?  A central computer cloud like Microsoft's Skydrive or Google's Document service, automatically backed up and secured for you?

I recently went through a long series of tests (having just passed the 60 year milestone, or was that millstone?).  I called the clinic to see if I could get a copy of the results.  Well, yes, but the doctor has to be there to approve it.  Are they my records? or not?

I recently read "The Decision Tree: Taking control of your health in a new era of personalized medicine", by Thomas Goetz, and I came across a paragraph or two about Microsoft's HealthVault - and the Google competitor - Google Health.

According to Thomas Goetz, writing in about 2009, published in 2010, quoting Microsoft's Craig Mundie, "Medicine is about to go from analog to digital. This means that manual processes [like diagnosis] are moving to a set of automated processes.  Of course medicine, from a bureaucratic point of view, is resistant to this sort of reengineering.  So we wanted to see what Microsoft could do to anticipate these changes and introduce technology that makes it more graceful to move from the old model to a data driven model."

Wow, that sounds exciting.  And from the looks of things, it's had three or four years to mature.  Were do I sign up?

As near as I can tell, and I did a LOT of research, the best place to sign up is Germany.  But, you need to live there.  And get your medical work done there.  In theory, Microsoft's Health Vault is available in the USA, Great Britain, and Canada too.  But... from my lonely log cabin in in Alberta, Canada - NOT.

Germany seems to have the most advanced HealthVault services.  I'm not surprised.  The Germans are big on rules, regulations, lines and squares, order and consistency.  That should make HealthVault tools easier to develop and implement.

Unfortunately, in North America, our need for something like HealthVault is exactly the reason it doesn't work.

Or does it work?  Thomas Goetz wrote about the dream in 2009.  So did the American Medical Association and the Mayo Clinic. According to the Microsoft HealthVault Privacy Statement, it was launched in 2007?

But since 2009, the AMA and the Mayo Clinic websites have virtually nothing to say about the HealthVault. Now that's impact! (NOT).

The only references you will find relate to the fact the Google gave up on Google Health, and if you are a Google Health user, you can supposedly transfer your data to Microsoft's Health Vault - if you do it soon.  I guess even the massive Google doesn't think your health records are important enough to keep more than a few months.

What is it really?  What is Microsoft trying to build?  You can be sure that Bill Gates and crew are not in this business 'to make you healthier', they're in it for the bucks.

Microsoft, it appears, is hoping that at some point, this will catch fire - and they will be the key player, in the middle between doctors, medical labs, and patients.  An enviable position. And to be honest, we do need someone in the middle.  I recently had an ultrasound.  I waited a week for results and then called my doctor.  But the results had not arrived.  I called the lab, to learn that they had sent the results to the wrong doctor. Presumably, the 'wrong doctor' ignored the 'irrelevant information' and my doctor didn't notice the absence of results.  The lab then, they said, passed the results on to the right doctor.  But what do I know??? Another week, I called my doctor and was advised that yes, my results had arrived, but because there was nothing to worry about, they didn't bother to call me.

I would like my results to come to me. And I send them to my doctor.  Or perhaps to come to both my doctor and to me, so I would notice if they were sent to the wrong doctor.

In my visit to my doctor, I also had a chance to take a peek at some of the lab results he received. To be frank, they appeared to be barely readable. Crappy copies of something printed on a crappy printer - poorly organized, I'm guessing each lab has their 'standard format', that does not conform to any other lab format. Am I wrong?

There are standard tests for most lab work.  There should be standard result formats.

If I want a 'second opinion' for example, at present, I must ask my doctor to send my results to my 'second doctor'.  Will he send the entire file with all notes? Maybe.... If I have the file, I can send it myself. Not only that.  If I have the files, I can also send it to an electronic doctor.

Electronic Doctor?  What's that?  There have been a few tests done with computers 'assisting' doctors in diagnosis.  In some cases, doctors do better, but in many cases, computer programs can do better. And that's not all.  Computer programs can learn to improve their skills much better than a doctor, who is busy working.  And when new knowledge is available, computers can be re-programmed much more easily than a doctor.  And even more valuable - computer programs can give diagnostic 'alternatives' with measures of probability.  There is a 31 percent chance that you have "abcde", but a 24 percent you actually have "bcdef".  This valuable tool is almost unheard of in the medical profession.  But your doctor might not like to be 'challenged', nor 'informed by his patients' (or a computer).

When we truly have a Health Vault, with all of our health records, it will enable many diagnostic tools and techniques that are unavailable in today's poorly organized medical infrastructure.

I wish Microsoft great success with HealthVault - although I'm not holding my breath.

My personal opinion is that:

a) it will take (more) years for the HealthVault concept to become something useful
b) there will be lots of controversy along the way.
c) it is always possible that some other company will 'come up the middle (between Microsoft's HealthVault, Google Health, and whatever Facebook might be planning) and surprise us all.

I believe in the concept of a HealthVault.  Everyone should have access to their personal medical records, in one place.  Our medical infrastructure is, to be frank, making a big mess of it all. Just try to get all of your medical records into together - if you are the same age as me, it is not possible.  Many have been lost, forgotten or destroyed, even, in a few cases, stolen.  And that is not in the best interest of my health.

Unfortunately, as a result of my investigations into the German version of HealthVault, Microsoft's HealthVault is now convinced my computer lives in Germany.  The only way I can get to the US HealthVault site is to use a different browser than my favorite Google Chrome.  So, I head for Internet Explorer and Google to HealthVault USA - it gives me HealthVault UK.  duh.... At least I can try my Facebook ID from there without a translator. Nope.  Trying to log in with Facebook just trashes me out to the 'signup' page - an infinite loop of opportunities and refusals...

to your health. tracy
Founder: Healthicine.org

If anyone out there has actually used the Microsoft HealthVault, I'd love to see your input. I have looked at the introductory pages (and the promises I must lie to in order to get access), but I don't feel like lying to my computer again today.

Of course you can lie to computers.  Frankly I seem to be forced lie to my computer EVERY DAY anyway. I've learned that lying to computers is something we take for granted.  I am constantly asked to "check that I have read and understood ... blah, blah, blah" - computers MUST be lied to if you want to get anything done. I could tell HealthVault that I live in New York, or Berlin, or Saskatoon, Saskatchewan.  Maybe that would give me access?  Unfortunately, even if I have an ID, it won't give me access to services from local doctors - because Alberta has not signed on.  But it might let me enter my own information (if I can get copies).  Even that would be an important step.