A True Placebo has No Effects 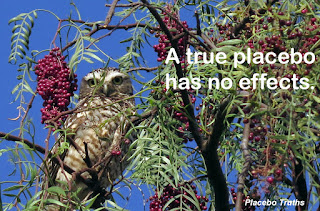 Do clinical studies lie? A true placebo has no effect. Is the Gold Standard of medicine, the double blind placebo controlled trial, scientific nonsense, based on "fools gold"?

A placebo effect, is defined by Webster's dictionary as: "improvement in the condition of a patient that occurs in response to treatment but cannot be considered due to the specific treatment used".


How can this be? Aren't placebos a gold standard tool of modern medicine? Actually no. Placebos are scientific nonsense.

The best known, perhaps first, serious medical consideration of placebo effect, was written by Henry K. Beecher, M.D. with the title "The Powerful Placebo". Beecher documented many situations where a placebo, given to a patient in a clinical study, had a powerful effect. But the placebo given, by definition, could not cause the effect.

But Webster's says the effect "cannot be considered due to the specific treatment used". How can a placebo have a powerful effect, if placebo effects are not caused by the placebo?

The Oxford Dictionary attempts to provide an answer with their definition: “A beneficial effect produced by a placebo drug or treatment, which cannot be attributed to the properties of the placebo itself, and must therefore be due to the patient's belief in that treatment”

This answer that has been used to support many medical research studies.

If placebo effect is "due to the patient's belief in the treatment",

then... if we treat the patient by modifying their belief and we successfully change the beliefs of the patient,

then...changing the patient's belief is a treatment. It's the that treatment caused "the beneficial effect" on the patient.

But, by definition, it's a real treatment, causing a real effect, not placebo treatment.

How can this paradox be resolved?  It's easy actually. We need to rewrite the definitions of placebo and placebo effect, with definitions that make sense.

Placebo Effect: a beneficial effect on a patient's illness, where we do not understand the cause.

Placebo effects are like shadows, illusions, unknowns, caused by misunderstanding. As soon as we understand, they disappear.  They become real effects.

But... If a placebo effect is an effect where we do not understand the cause, then, what is a placebo?

Placebo: a treatment followed by a beneficial effect on the patients illness, where we do not understand the cause of the benefit.

What does this mean for the Gold Standard of medicine, the double blind, placebo controlled, clinical trial?

A double blind placebo controlled clinical trial pits a placebo against a new medicine or treatment. Sometimes, the medicine wins. Often, it's a statistical, technical draw. Once in a while, the placebo wins.

Let's look at all six cases.


When the Treatments cure:

2. If the cure is sometimes produced in the medical group, and sometimes in the placebo group, then - we really don't know what happened.

a. A cure is a cure. If we know how to cure, there is no need for a clinical study. We diagnose the disease - and prescribe the cure. The illness is cured.


When the Treatments Don't Cure:

The clinical study might produce a beneficial effect on the patient's illness, or their symptoms of illness, (or not), but it cannot produce a cure for the illness. Most clinical studies have no intention to cure.

5. If a benefit results from the treatment group, and the placebo group also sees a benefit, then we really don't know what happened. This is the result of many, perhaps most, double blind, placebo controlled clinical studies.

And the Winner is? 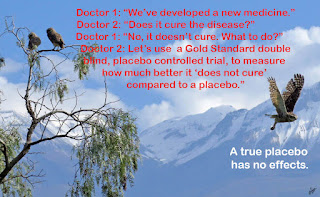 How can this happen? It happens because the goal of double blind placebo controlled study is to find a medicine that "does not cure" better than the placebo treatment "does not cure".

Double blind placebo controlled studies measure which treatment "does not cure better".  The result is predictably, nonsense, failure to understand.


The next time someone says "It's probably just placebo effect.", ask:
"Was it caused by a real placebo, or a false placebo?"