The Myth of Alternative Medicines


What are Alternative medicines?

Even the FDA is roped into this argument, trying to define alternative medicines, in a 'draft guidance' on Complementary and Alternative Medicine Products and their Regulation by the Food and Drug Administration.

The draft was crated in 2006. But it is still a draft 7 years later.  Why?  I believe it's still a draft, because there is no legitimate way for the FDA to discriminate between what they call conventional and what they call alternative medicines.  It's even more of a problem for them when some medicines jump back and forth across the gap. Vitamin C, for example, is a conventional medicine when a doctor prescribes it for scurvy, but when he recommends it to prevent colds, it's an alternative medicine. 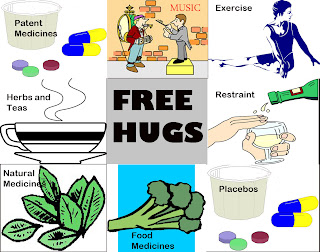 Alternative medicines do not exist.

There is no clear classification called "alternative" medicine.

If the illness is caused by an excess - cut back on, or eliminate the excessive factor.
When do we NOT KNOW the correct treatment?  It's a difficult question.  There are some common situations where we don't know the correct treatment:
1. When we don't know the cause(s) of an illness
2. When addressing the cause(s) does not heal the illness
3. When the diagnosis is wrong

We don't know the causes of 'chronic illnesses'. We don't know the cause(s) of specific instances of heart disease, cancer, arthritis, diabetes.  In many cases, we can find the cause(s), with due diligence.  But our medical systems (and patients) often ignore due diligence preferring 'solutions'. We don't know the exact cause of some diseases where we 'think we know' the cause.  The cause of obesity, for example, seems clear, until you look more carefully at individual cases. There are many causes in theory, but we can't cure the illness, because our suggested 'cause' is not correct.

Many illnesses, many specific cases of individual illness, are caused by multiple deficiencies and excesses.  But our medical systems prefer 'single' cures - and as a result, prefer to identify 'single causes.' I cannot think of a single illness that is clearly a result of TWO causes., much less an illness with 5 causes.  Can you? But it is possible, even common, for many people to be deficient in many known nutrients, and excessive in others.
When we don't understand the cause, we still need to choose a treatment.  We choose one or more 'alternatives'. For each of the chronic illnesses, we can find many alternatives, hundreds.  There are many 'prescription alternatives' and many more natural, homeopathic, Chinese, traditional and other alternatives - for each illness. All treatments that do not address a known cause are 'alternative medicines'.

Choosing a treatment without a clear understanding of the cause, often leads to nonsense.  In many cases, it leads to suppression of symptoms of the illness - while the chronic illness actually progresses.  The top selling patent medicines do exactly that, as previously noted in The Medicines Myth. They don't cure, they treat symptoms, not illness.

Often we 'try different treatments' to see if they work.  This is a useful problem solving technique for identifying the cause.  "I think that I'm sleepy every morning because of a coffee deficiency.  I think I'll try some coffee. Yep, that worked. I guess it really was a coffee deficiency." It sounds fake, but there is some truth to be found. But trying different treatments falls prey to the 'symptoms have disappeared', but the illness is still progressing' mirage.

And gets more complicated. Some treatments work by addressing secondary causes. If you drink a lot of coffee one day, the next day you will suffer coffee withdrawal symptoms.  There are two alternative treatments.  You can drink more coffee, to address the withdrawal symptoms. It works.  Or you can wait - or drink water, green tea, or have some ice cream, a massage or acupuncture, and eventually the symptoms will go away. Many treatment alternatives work perfectly well. One (water) is less expensive, in theory - another (coffee) gives more enjoyment, in theory.

When you see, or hear the common quote from a medical authority "there is no evidence that...", beware.  "There is no evidence that ..." is not about the evidence.  It is about the speaker, who is speaking. You can easily test this theory.  Search for evidence - it's often easy to find.  Present it to the 'no evidence exists' authority with the evidence, and see if they change their position.  The claim that there is "no evidence" is easily disproved by a single example, no matter how poor the quality.  Even poor evidence is evidence.

"There is no evidence that" claims of "no evidence" have any medical value.

There is no evidence that "Alternative Medicines" exist separate from 'real medicines'.  All medicines are alternatives - unless they are clearly understood to be the 'correct' medicine.

Neither side is interested truth, they prefer increased sales.

There are some people out there trying to sell the truth. In all probability, some of them are right, some are wrong.  But there is so much noise from the arguments about 'alternative' medicines, that the signal is totally lost, and no-one, patient, doctor, or the FDA can find the truth unless they are making an individual decision.  Theory comes from clinical studies.  Every truth is anecdotal.

We can make progress on an important distinction that is largely ignored today.  Is this medicine "health based" or illness based.  We need to develop a preference for Health Based Medicines.

When you have an illness where no clear solution is the 'correct medicine', it's up to you.  You need to decide what treatments are best for you.  You need to choose.  Your doctor(s) can recommend, but ultimately, it's up to you.  Unfortunately, the FDA, and the marketing departments of arguing medical establishments don't want you to choose certain medicines - and sometimes use severe force to restrain your rights. You need the freedom to choose your treatment.  It's your right, and your responsibility.  Everyone has a right to life, liberty, and the pursuit of healthiness.  Your best exercise is to exercise those rights.

to your health, tracy
Founder: Healthicine.org

This post has been republished by Waking Times
This post has also been translated into Spanish by http://editorial-streicher.blogspot.com/  and the translated version can be seen here: El Mito de las Medicinas Alternativas
Tracy is the author of two book about healthicine: