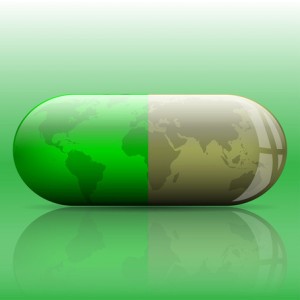 Two thousand five hundred years ago, Hippocrates said "Let food by thy medicine, and let medicine be your food." The concept of "open source" had not been invented, but Hippocrates was talking about "open source medicines".

Opensource.com's blog by Bryan Behrenshausen says "Open source is like sharing a recipe." I will apply his 'loaf of bread' metaphor to medicine to explain, using mostly, his exact words. I will use the word 'food' for 'medicine' in the way of Hippocrates.
-------------

Imagine that you have created something for your friends, a food, that can actually improve healthiness. By sharing this food with your friends, you not only give them something that sustains them, but also strengthens their health, and thus their relationships with each other and with you.

But what if you share more than the food? Suppose that in addition to sharing this wonderful food, you also share the recipe for that food. Now you have given them something much more valuable: the power to reproduce the gift you've given them, and the opportunity to improve the lives of others as you've improved theirs.

If your friends lives and heathinesses are improved by the food you've made, they can make more of it for themselves and their friends. If they prefer a food with slightly different ingredients, they can modify your recipe, creating foods that suit their tastes and needs. Maybe some of your friends have dietary restrictions and want to know precisely what has been put in the food you've given them, lest the very thing meant to help them might actually harm them. Possessing the recipe means they can now make a more informed decision about whether to consume what you've made.

And now that your friends have the recipe for your food, they can work with you to produce more of it, increasing the number of people exposed to your creation. Sharing the recipe also means that you and your friends can cook together, strengthening your relationships, and potentially drawing others into the bond you share—because you now possess a common tool - sharing - for collaboration.

Sharing a recipe isn't like sharing food itself. When you share a recipe, you haven't lost anything; both you and your friends can work with and enjoy the same knowledge at the same time, passing it on without consequence—unlike a food that's already been cooked, which effectively disappears when you've given it up or eaten it.
--------------------
My grandfather was fond of saying "You can't return a favour.  Pass it on, and it will work its way back to me." Open source is like that.

If you need a patent medicine, you must jump through some legal hoops, before you are even allowed to purchase it.

First, you must qualify, by being diagnosed. You cannot diagnose yourself. Your neighbor friend, brother or mother cannot diagnose you. You must be diagnosed by someone who is an active member, in good standing, of the medical union - e.g. a Doctor of Medicine.

Once you jump through all the hoops, you don't own the medicine. If you don't use it all, you are not supposed to save some of it, and you are definitely not allowed to sell - or even give it away, to someone else, that would be illegal.

Patent medicines are preferred by people who want to make money from their medicines. Having a patent has no bearing on the effectiveness or healthiness of the medicine.

Patent medicines are usually designed to be powerful and fast acting. They are created from concentrated chemicals or chemical extracts, that are then diluted with exacting precision to a prescribed dosage. Consumption over the prescribed dose can cause serious health problems - in fact, in many cases, consumption AT THE PRESCRIBED DOSE can lead to serious health problems, up to and including death in some cases.

Patent medicines usually tackle illness by decreasing healthiness in some way, in the hope that you will be able to recover from the 'different unhealthiness' more easily. That is why all drugs have side effects.

Because open source medicines are closer to food, like taking chicken soup for a cold, or for the soul, they are usually low in toxicity. Open source medicines are usually slow acting because they are not concentrated like patent medicines. As a result, they are safer. Some 'open source medicines' are true 'healthicines'.  That is to say, they are not 'drugs' - and they do not have 'side effects'.  If you are deficient in folate, and you buy Folic Acid to supplement your diet - you will not experience side effects - although you might experience health effects - but we don't often recognize the symptoms of healthiness.

Increasing healthiness is not something that happens in a moment, or a day. It takes time to increase healthiness.

Today, GreenMedInfo doesn’t specifically identify any medicines as healthicines. That could be due to the fact that no-one studies healthicines yet. There are no research papers on healthicines - so there is nothing for GreenMedInfo to publish about healthicines. What is a heathicine? A healthicine is something that increases healthiness. I believe that, when Hippocrates was talking about foods and medicines, many of his medicines were healthicines, although the word had not yet been coined.

I am proud to be a Sponsor of GreenMedInfo and their work. I hope others will pick up the banner for open source medicines - so that we can all be healthier.

Which is better?  Open source medicines, or patent medicines? It makes no sense to say that one is better than the other.

One of the reasons we don't have good access to open source medicines, is because we don't have many health freedoms.  If we are to build the best systems for health, to create a system that promotes continual health improvement, we need to improve the health freedoms of choice and information. I believe we should always look for an open source medicine first, because it is more likely to tackle the true cause. Patent medicines, by design, almost never tackle the cause of illness.

Everyone has a right to life, liberty, and the pursuit of healthiness.
to your health, tracy
healthicine.org
This post was originally published on Wakeup-world.com
It has also been republished at http://returningtohouse.wordpress.com/2012/09/23/why-we-need-more-open-source-medicines-by-tracy-kolenchuk/
and: http://agmclimas.com/why-we-need-more-open-source-medicines/