Our medical system is less comfortable and less effective as studies and results move from the body to the mind, from the mind to the spirit, and from the spirit to the community.  Each of the top layers of the hierarchy of healthiness is studied with fear rather than with respect by science and medicine.

The placebo effect is one of the most misunderstood, misrepresented, and maligned effects of health and medical products. That's because placebo effects are just a technical name for the spirit, which medical science refuses to acknowledge.

Placebo is an interesting word, the definition of which helps to create an incorrect view.  Placebo, according to Webster, is "a usually pharmacologically inert preparation prescribed more for the mental relief of the patient than for its actual effect on a disorder". Written as if placebos do not provide physical relief.  But they do.

Many doctors prescribe 'placebos' because they recognize that mental relief is an important aspect of physical relief. 'So called' mental relief is often accompanied by physical relief. Even if they don't understand the details, these doctors are not 'deceiving', they are acting in the best interests of the patient. They often prescribe 'patent medicines' that, in theory, will have no effect on the condition, rather than an alternative medicine - because paying more, and going to a pharmacy, increases the placebo effect. Some doctors recognize that drugs with an actual effect - not specifically related to the patients (untreatable by medicine) condition have a stronger placebo effect.  The most effective placebo is often not an inert pill, but one that the patient can 'feel working'. 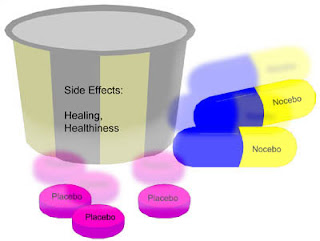 The Placebo Effect has three parts:

1. The basic placebo effect is an increase in a patient's response to a treatment.  It doesn't matter if the treatment is a patent medicine, an alternative medicine, a surgery, or a prayer - all treatments benefit from the placebo effect.

2. The nocebo effect (a reverse placebo effect) can increase your awareness of, or the presence of side effects of a treatment, even to a placebo (null) treatment, or from a diagnosis. In some cases nocebo effect can result in death where there is no danger.

3. Regression to the mean is a natural physical process that moves statistical outliers back to the normal range. It works equally well with golf tournaments, coin tosses, protest movements, as well as health and medical conditions.

The placebo effect, and the nocebo effect (but not regression to the mean) are effects that lie on the layers of body and mind, and of mind and spirit.

Doctors (and others) often claim that the effects of 'alternative' medicines are entirely due to the placebo effect. This allows them to ignore 'facts' in favour of untested 'fictions'.

Almost everyone ignores, or is ignorant of 'regression to the mean'.

How does regression to the mean work?

Golf scores provide an interesting example.  If you review the field of competitors from a golf tournament, and rank them according to their score on the 1st hole, some will have good scores - and some will have bad scores.  But the scores on the 1st hole will, likely, have little predictive value for the tournament. If you add in the scores from the 2nd hole, some of the people with the highest score will 'regress to the mean'. People with the lowest score will also regress towards the mean. All scores move towards the average.  The sequence is statistically irrelevant, even though it has an effect (placebo effect?, nocebo effect?) on the participants performance. With any two holes counted, you might still have the final leader - in the bottom half.

The more rounds you add to the score - the more the scores bunch together, and the better your information. We tend to watch golf score from round 1, to round 2, to round 3, and we only pay attention to the leaders - so we miss the big picture. We miss regression to the mean entirely, because we perceive little effect on the leaders. In round 1 - someone is ahead (often as random as who did the best in round 10).  Then in round 2, someone else is ahead - because the leader in round 1 was the farthest from the mean, and his score 'regressed to the mean'. And so on.


Medicine, is complicated, even if you just study the physical facts and ignore the spirit. If you select a group of people suffering from a cold, for example, some will have mild colds, some moderate colds, and some - severe colds. Some will have had a cold for one day, some for 3 days, etc. The mean appears to be those with 'moderate colds'.  But  that's a poor understanding. Colds are not normal. The population on average does not have a cold.


The mean they are regressing towards is actually 'the mean' of the normal population.  Most people do not have colds.  In a very short time - the members of your test group will 'regress to the mean' and most of them will no longer have colds.  This is 'normal'.


It's even more complicated. Some are very healthy people, some are less healthy and some are very unhealthy - where healthiness is measured independent of their colds.  Some eat nutritious diets, some junk food diets.  Some exercise regularly - some are couch potatoes. Some are mis-diagnosed, they don't really have a cold, they have allergies, or even heart failure. Healthiness changes slowly, much more slowly than the symptoms of a cold.

Studies of cold medicines typically have very short duration, in the hope that this will minimize those complications.  But if we were to study cold healthicines - we would need to study people over larger variations of healthiness and over wider periods of time.


As a result, studies that struggle with 'placebo effect' and ignore 'regression to the mean' constantly find confusing, conflicting results.  Who to blame?  Not themselves of course, it's much easier to blame 'placebo effect'.

If we are to learn the truth about health, we need to stop ignoring or hiding from real effects.  Placebo and nocebo effects are real effects.  As is regression to the mean.

There is another important aspect of the placebo effect.  Very important.  We can use arthritis as an example, but it applies to any illness.

If we are studying a group of people with arthritis (or any chronic illness), there is a huge variety in their conditions.  Some have mild arthritis   Some have moderate arthritis.  And some have severe arthritis. Some have had arthritis for years - some for decades or generations. Some eat healthy diets and some don't.  Some exercise regularly - but some don't.  Some might take up, or drop, an exercise plan during the study. Each of them is sometimes healing - and thus they have symptoms of healing.  Their healing status might change during the study, due to 'control' conditions, or uncontrolled conditions. But scientific studies tend to 'not measure' symptoms of healing'.

So called 'scientific studies' generally ignore these variations, or deliberately trying to minimize them. Of course when a drug is marketed, the marketing is 'expanded' beyond the variations studied. A treatment is tested on the selected group.  The treatment has an effect.  Placebo effect has an effect. The outliers in the group tend to regress to the mean (unless they die - a mean we will all regress to eventually, in which case their results might be excluded from the published study).

Scientific studies want nice clean results.  The placebo effect is a nuisance.  Nocebo effects are not even noticed, nor measured in most cases. Regression to the mean is easy to ignore - and extremely difficult to measure with regards to both healthiness and illness.

A severe weaknesses of science based medicine is the need to be 'right' or to find the 'true' answers. The simple truth is: truth is complex.  There are many truths, and many views of truth. Many valid views of truth - but medical science wants to find 'the one'.

Some doctors are more spiritual, more 'placebo effect enhancing' and this too will regress to the mean, towards the average, as time passes and as more results are gathered.

The placebo effect, and the nocebo effect reside on the borders between body and mind, and between mind and spirit.  Regression to the mean lies on the border of our understanding. We have a mathematical theory, but it is difficult to apply to all of the factors that 'regress'.

The spirit is independent of the technologies of science. It is at a higher level than mere facts, figures, scientific studies, and clinical research studies. Medicine, and science try to ignore and disparage spiritual and placebo effects. They have no mechanisms to understand them.  I believe that eventually our sciences will encompass the spirit, but today, there is only fear that the spirit will overwhelm (or perhaps trick) science.

Science is afraid of spirits.

To quote medical historian Anne Harrington in The Placebo Effect: An Interdisciplinary Exploration, "Placebos are the ghosts that haunt our house of biomedical objectivity, the creatures that rise up from the dark and expose the paradoxes and fissures in our own self created definitions of the real and active factors of treatment."

When we hide behind, or from spirituality, and the placebo effects, our knowledge of health is decreased. As a result of decreased knowledge, our health freedom is decreased.

Everyone has a right to life, liberty, and the pursuit of healthiness. Even a right to the most effective placebos our spirits our sciences can create and our spirits can handle.

this post has been re-published by
Wakeup-World
Waking Times
GreenMedInfo
AGMClimas.com
sott.net